How to Watch TOD TV Abroad? Get beIN Outside MENA | December 2022

TOD TV is a streaming platform launched in January 2022 by beIN Sports’ Group. It brings together the best sports and entertainment programming worldwide into one easy-to-use platform.
In addition to thousands of hours of On Demand content, and as a part of beIN Sports Group, TOD has the rights to live-stream various sporting events, including the English Premier League, the UEFA Champions League, Europa League, World Cup Qatar 2022, Olympic Games Beijing 2022, and more, through website and apps for iOS and Android devices.

Due to some restrictions, TOD is available only in the Middle East and North African countries (MENA); Qatar, Kuwait, KSA, UAE, Oman, Jordan, Iraq, Bahrain, Lebanon, Palestine, Yemen, Syria, Mauritania, Egypt, Libya, Chad, Sudan, South Sudan, Tunisia, Algeria, and Morocco. Therefore, outside these regions, the streaming of TOD content is blocked and not available. So how to bypass TOD geoblocking and get access abroad?

How to Watch TOD outside MENA countries?

The streaming of TOD’s Video-On-Demand and Live beIN Sports channels from outside MENA countries is blocked. We get error messages like:

But we can bypass these region restrictions messages and watch TOD content using one of our recommended VPNs.

• Which VPN is working with TOD TV?

We have tested various VPN providers with the TOD TV platform, and below, you can find an updated list of working VPNs with TOD’s On Demand content and live beIN Sports channels:

Get the Deal
Exclusive VPN Unlimited Discount | 20% off

Exclusive Deal for VPN Unlimited. Good VPN for TOD, beIN Sports, and many other streaming services, like Netflix and Disney Plus. | 30-day money-back guarantee. 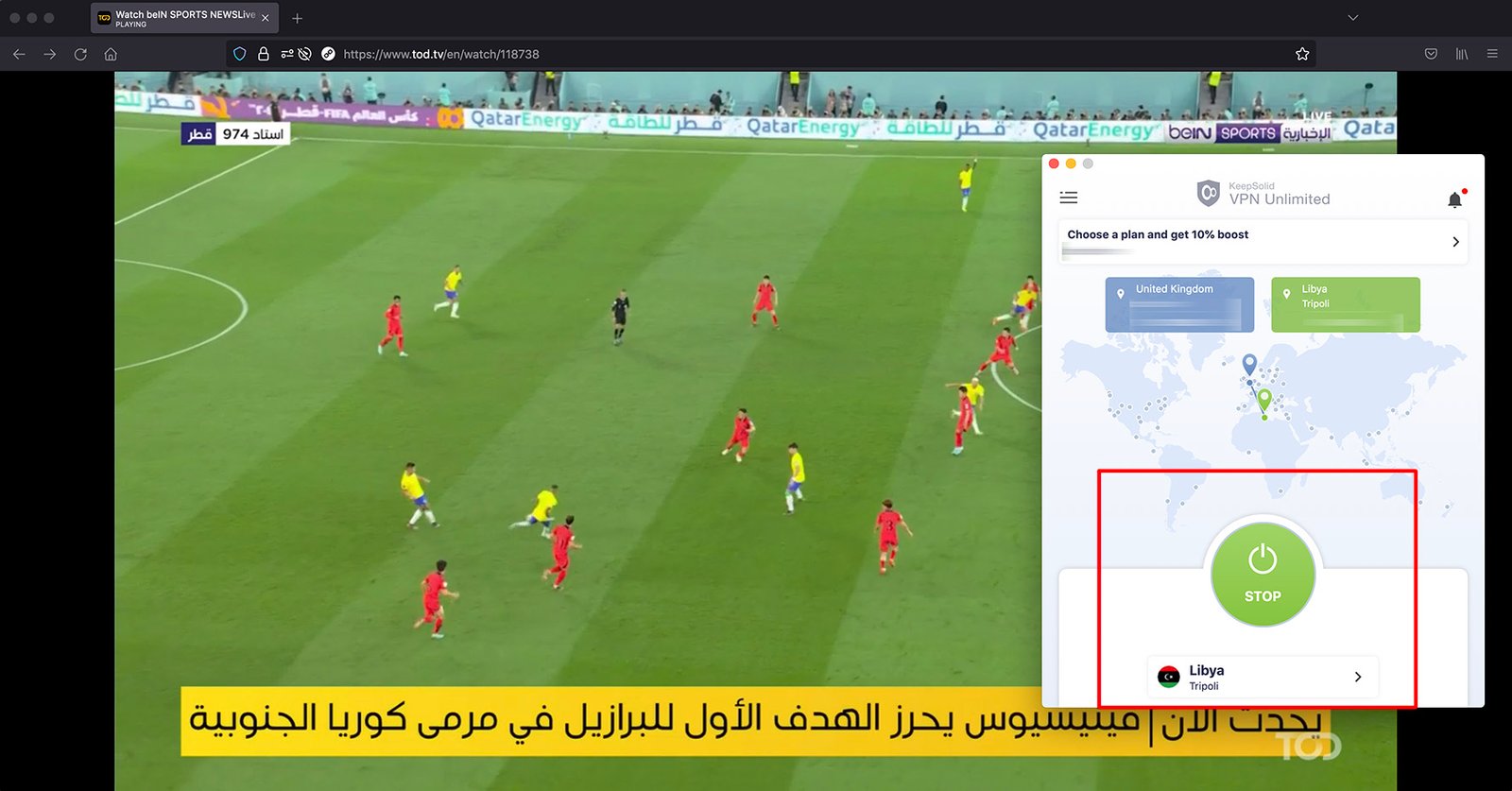 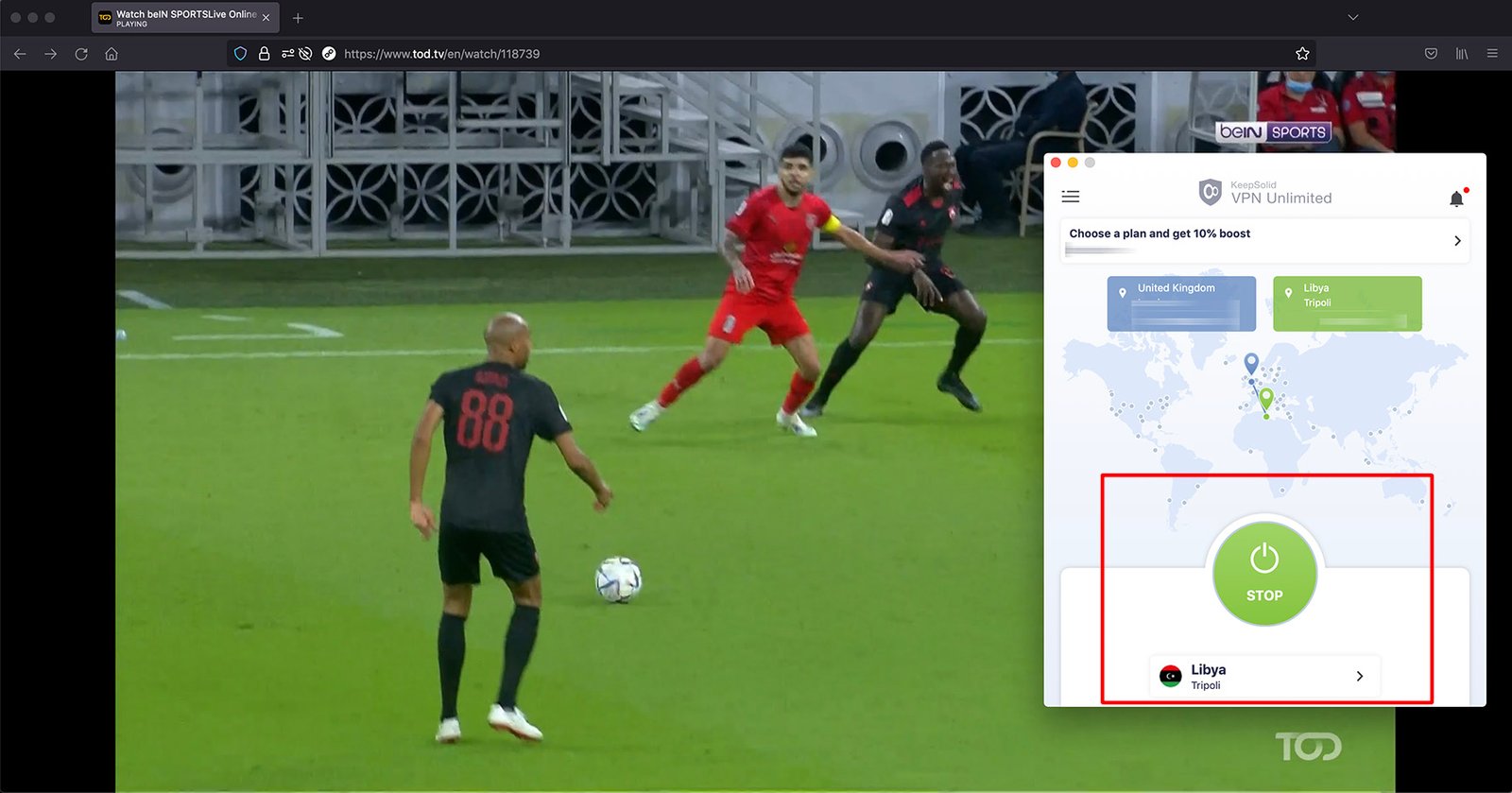 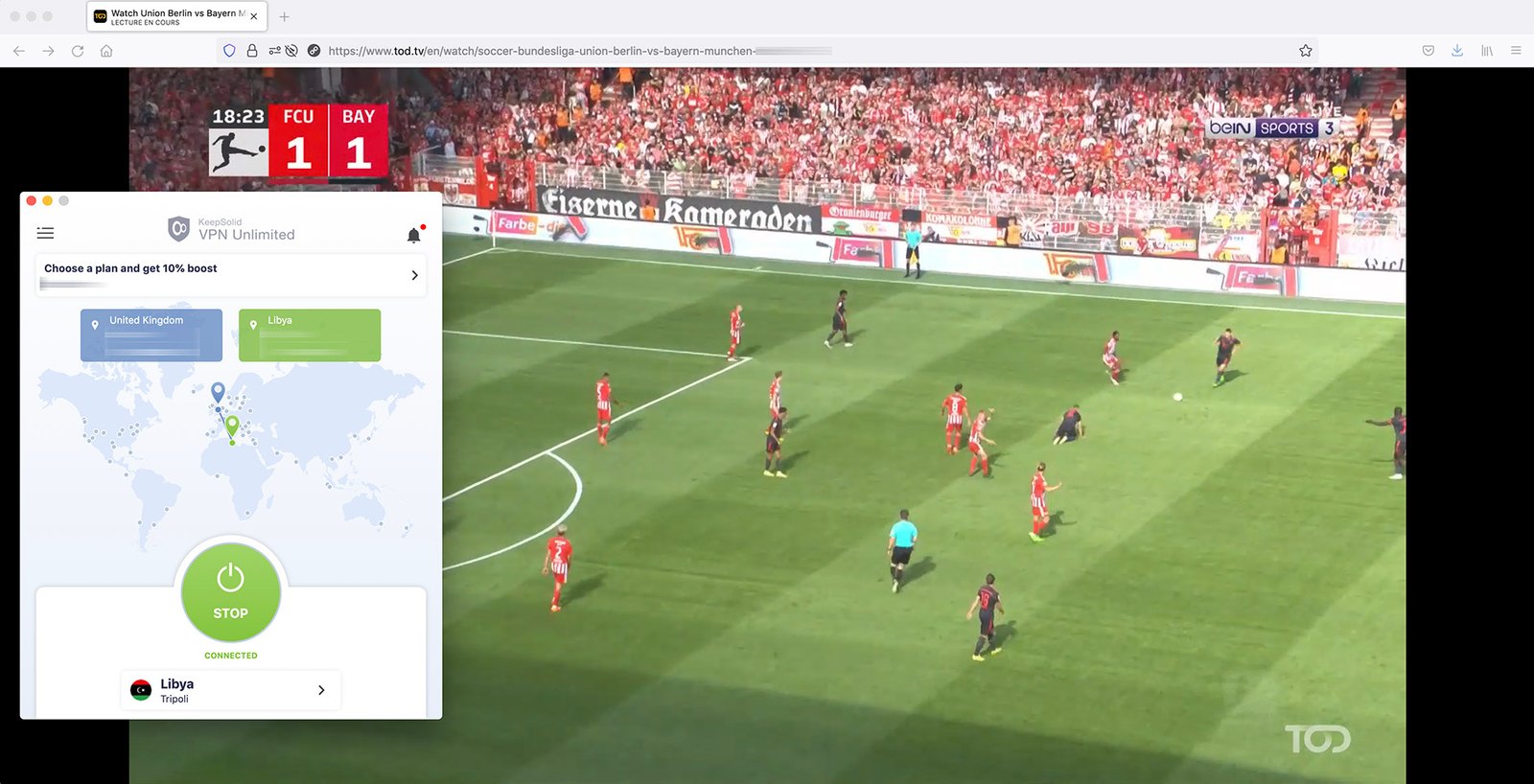 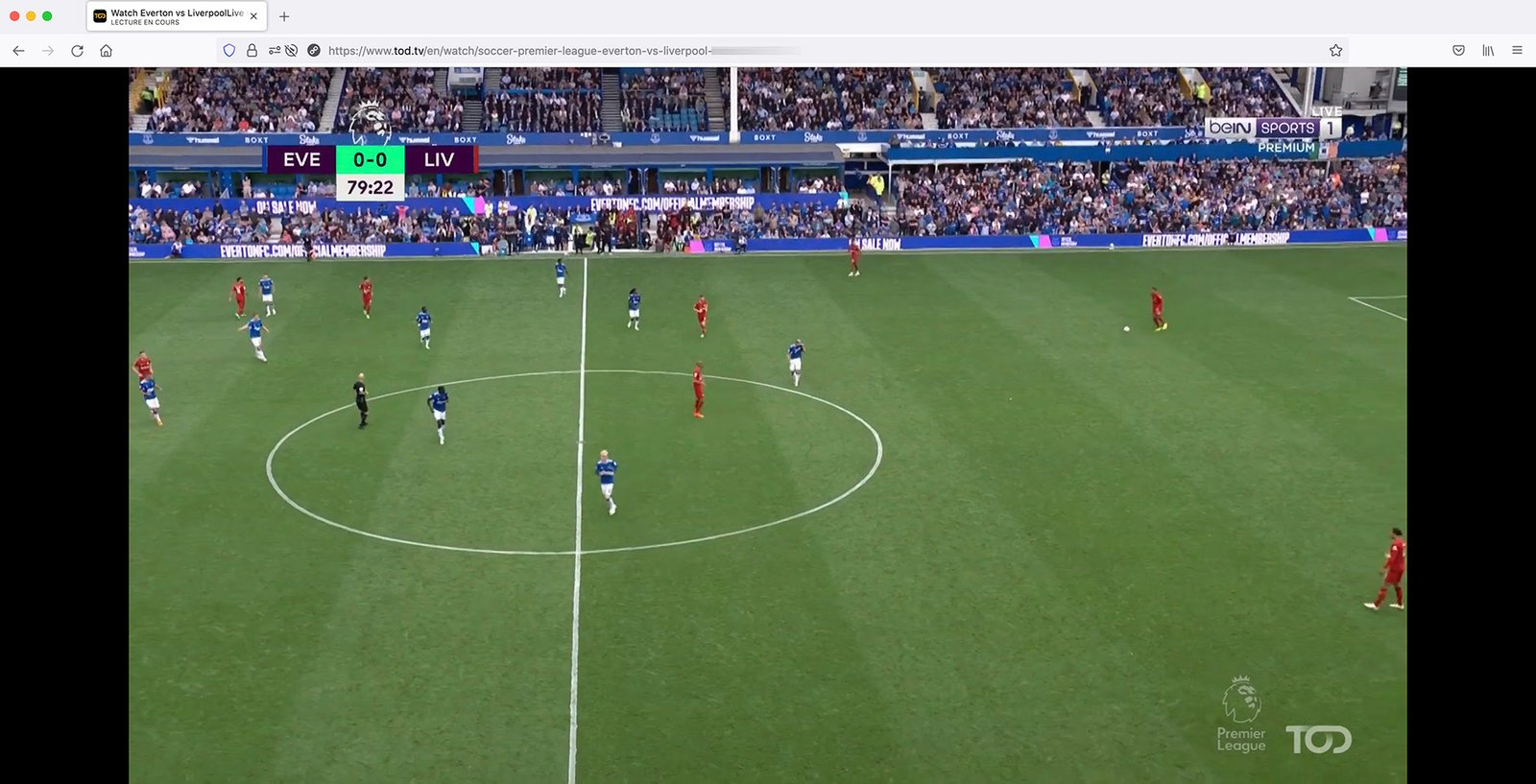 TOD TV Packages are not visible when you enter from outside MENA countries.

Open VPN Unlimited, connect to the Libya server, and refresh the page or restart your browser.

After refreshing the page you will see the packages of TOD TV.
You can create a free TOD account by skipping the payment step or getting a 7 days free trial by adding your Credit/Debit card or Paypal. The prices of TOD’s subscription are as below:

Choose your Package and start creating your free or paid account.

Verify and validate your Email

Skip the payment step if you want only to create a free account.
On-Demand content and paid beIN Sports Channels will not be available with your free subscription. You will get access only for free beIN Sports Live channels.

Live free beIN Sports channel without VPN:
We get a geoblocking message: “This video is not working or not available in your region.”

or “This content is not included in your package or not accessible from your current location.”

Choose your Package, select your payment method and checkout.

Here we are successfully subscribed to TOD

If you are not connected with VPN Unlimited you get a geoblocking message: “This content is not included in your package or not accessible from your current location.”

Open VPN Unlimited, connect to the Libya server, and refresh the page.
Live match successfully opened (You can select highlights moments and watch it in playback mode)

You can also enjoy the on-demand big library of Movies, Shows, Kids, and more.

How to Watch English Premier League live on beIN Sports via TOD TV?

The beIN Sports MENA has been the official broadcaster of the English Premier League for several years, including this new season of 2022-2023. The channel broadcasts live matches of the EPL and also shows highlights of the games.
In addition to their beIN Connect platform, beIN Group has added all beIN Sports channels to their new platform TOD TV. So you can watch all English Premier League live matches and stream replays and highlights videos via TOD TV.

If you are in the UK or anywhere outside MENA countries, you can bypass the geoblocking access to TOD TV by connecting to one of our recommended VPNs. In our example below, we choose VPN Unlimited to unblock the TOD TV streaming player and watch beIN Sports channels.

As we are outside MENA countries, the content is geo-blocked. So open VPN Unlimited and connect to the Libya server.

How to Watch Bundesliga live on beIN Sports via TOD TV?

Bundesliga is one of the most popular football leagues in Europe. beIN Group has the right to broadcast all Bundesliga matches to their satellite customers, beIN connect, and TOD TV subscribers of MENA countries. The streaming of Bundesliga matches via TOD TV is not available outside MENA countries. So, we will bypass the geo-blocking by accessing TOD TV through a VPN using a MENA server.
We picked from our recommended VPN providers VPN Unlimited, one of the working VPNs with TOD TV, and we connect to the Libya server.

What is TOD TV?

TOD TV is an online streaming service that offers a vast On-Demand library of movies and TV shows, plus the broadcast of all beIN channels, including live sports events from around the world through beIN Sports.

What is the difference between beIN Connect and the TOD TV platform?

Yes. All beIN Sports free and paid channels are available in the TOD platform. You can also find all beIN entertainment channels like beIN Movies, beIN Series, Boomerang, and more.

TOD TV offers a 7 day free trial with its entertainment pack. Then a subscription is needed starting from $7/Month.

How much does TOD TV cost?

The price of a TOD subscription depends on your location. If you are located in North Africa, the subscription starts from $7/Month, but if you are entering the TOD platform from the Middle East, the price starts from $10/Month. You can use our recommended VPN to get TOD TV’s subscription at the lowest price.

Can I watch English Premier League on TOD TV?

How can I watch TOD TV in the UK?

The streaming of TOD content is not possible in the UK. But you can bypass this restriction using one of our recommended VPNs from the updated list above.

What devices can I use to stream TOD TV?

You can stream TOD from any PC, laptop, or smartphone. TOD App is available on iOS and Android devices.

Yes. TOD TV has the rights to stream liveBundesliga matches. You can watch the entire Bundesliga season through live beIN Sports channels available on the TOD TV platform.

Surfshark VPN 83% Off - Get Antivirus for free + 2 Extra months

How to get RaiPlay and watch Rai TV outside Italy? | December 2022

How to get RaiPlay and watch Rai TV outside Italy? | December 2022

How to Watch TOD TV Abroad? Get beIN Outside MENA | December 2022

Tutorials and Tricks 12
Deal of the day

When you visit any web site, it may store or retrieve information on your browser, mostly in the form of cookies. Control your personal Cookie Services here.